Mecatol Rex. The center of the known galaxy and seat of the former Lazax Empire. Scarred by the flames of betrayal, Rex is a specter of a fallen empire and of ages long forgotten, yet it remains an object of reverence‚¬€ and desire‚¬€in a galaxy of conflict and uncertainty.

Once, the great city that spanned its surface was the pinnacle of civilization. Today, Mecatol City is naught but a blasted shell of its former glory, a grim respite in the toxic Sea of Desolation that covers the majority of the planet.

Even so, its parabolic history of decadence and destruction does little to deter those who would seek to harness its power. The Winaaran custodians who dwell within the remnants of the city maintain what is left of the former capital, waiting for one of the Great Races to step forward and take up the mantle of the former Emperors.

But who among the races of the galaxy could fill the void left by the Lazax? To lay claim to the throne is a destiny sought by many, yet the shadows of the past serve as a grim warning to those who would follow in their footsteps...

Each player takes command of one of seventeen unique civilizations to compete for interstellar supremacy through warfare, trade, uncertain allegiances, and political dominance. Every faction offers a completely different play experience, from the wormhole-hopping Ghosts of Creuss to the Emirates of Hacan, masters of trade and economics. These seventeen races are offered many paths to victory, but only one may sit upon the throne of Mecatol Rex as the new masters of the galaxy.

The Age of Twilight

No two games of Twilight Imperium are ever identical‚¬€at the start of each galactic age, the game a board is uniquely and strategically constructed using 51 galaxy tiles that feature everything from lush new planets to supernovas, from asteroid fields to gravity rifts. Players are dealt a hand of these tiles and take turns creating the galaxy around Mecatol Rex, the capital planet seated in the center of the board. An ion storm may block your race from progressing through the galaxy while a fortuitously placed gravity rift may protect you from your closest foes. The galaxy is yours to both craft and dominate.

A round of Twilight Imperium begins with players selecting one of eight strategy cards. These cards both determine turn order and provide players with special abilities in the realms of ship movement, trade, technology, and more.

After this phase, players will then take turns exploring the galaxy, claiming new planets, engaging in warfare, and activating their strategy cards. Players do this primarily by using command tokens separated into three distinct areas on their command sheet. Command tokens in the tactics pool may be placed on galaxy map tiles to activate those specific systems, meaning your ships in nearby systems may move in to them. If those ships carry ground forces, they may land on unclaimed planets in that system and add them to your empire, giving players additional resources to construct ships and research technology, and additional influence to vote in the galactic council. 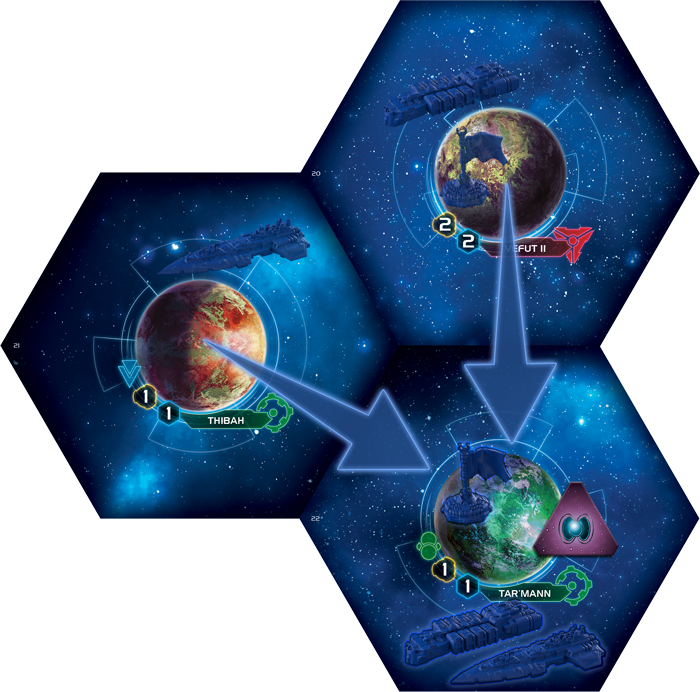 The blue player activates the system containing the planet Tar'mann. They can then move ships to that system from a distance equal to or less than that ship's movement value. The carrier and dreadnought both have a base movement value of one, so they may move in from adjacent systems. The carrier brings an infantry unit with it, and the blue player places that unit on Tar'mann, claiming it for their empire.

If there are another faction's ships in the activated system, your forces and theirs collide in an epic battle. In battle, players will roll one ten-sided die for every participating ship‚¬€should that roll be equal to or greater than the ship's combat value, a hit is assigned to the enemy. After all dice are rolled, players assign the hits rolled against them to their ships. Some ships may only take one hit before being destroyed, while others with the ‚¬Å“sustain damage‚¬? ability may take two. The process then repeats, with both players having the opportunity to declare a retreat and moving to a friendly adjacent system at the end of the next round of combat.

Command tokens are also assigned to the strategy allocation area. While the eight strategy cards give their owners unique actions, when they are used during a turn, every other player gets the opportunity to use the secondary ability on the card, often by spending a command token from the strategy pool. This keeps every player involved even when it isn't their turn, giving them the opportunity to use powerful effects at the cost of a valuable command token. The final area for command tools is the fleet pool, determining how many of their ships can be in one system at a time.

Your fleet will consist of a variety of these ships, represented by plastic miniatures in six different colors. Carriers ferry your infantry from system to system, the mobility of Cruisers makes them perfect for exploring new systems, Dreadnoughts provide heavy firepower for your fleets, Destroyers are perfect for picking off enemy fighters, PDS units defend your systems, and the mighty War Sun's devastating firepower is unrivaled in the galaxy. Additionally, each faction comes equipped with their own unique flagship that synergizes with their unique abilities.

A round continues until all players have passed, then the status phase begins. Here, players can claim a variety of public and secret objectives that earn them victory points. These can be anything from engaging in friendly trade to invading a player's home system. These objectives steer the direction of the game, and with forty different cards, every game will have a different focus. The first player to earn ten victory points wins the game.

Finally, if a player controls Mecatol Rex at the center of the galaxy, players then participate in the agenda phase. The Speaker will draw a card from the agenda deck and prompts a vote that will change the flow of the game. Some cards may award an elected player a victory point, while others may restrict trade or construction. Players then vote on the card using the influence values shown on their planets‚¬€whichever choice has the most votes in the end is enacted as law. Players will trade valuable resources and favors to get the result they want; often a single law is enough to shape the game to your favor. Canny players should bear in mind that this happens twice each round‚¬€going all in on the first vote, though it may benefit you greatly, could prove to be a dangerous proposition. Players should try to divide their votes responsibly, lest they get stuck with an unfavorable, and insurmountable, political obstacle.

A Galaxy of Change

Twilight Imperium commands an imposing legacy unlike any other game out there. For twenty years, this venerable strategy board game that casts players as the authors of their own epic, spacefaring saga has seen three full editions and several expansions, each of which has changed the thrilling gameplay and vibrant universe of Twilight Imperium. Twilight Imperium Fourth Edition sees several changes from previous editions in order to push the game forward into the dawn of a new age. These changes include but are not limited to:

Politics - Previously, in Third Edition, the politics phase began with the primary ability of the Politics strategy card. Now the agenda phase occurs at the end of every round after Mecatol Rex has been claimed. Players get to refresh all their planets for the agenda phase, meaning they don't have to split their planets for use between resources and influence. Like Third Edition, agenda cards are used to pass new laws in the galaxy, flipped from the top of the deck. After one law is voted on, a second card is flipped and another round of voting occurs. Planets are refreshed again after the agenda phase ends.

Imperial Strategy Card - Previously, the Imperial strategy card's primary ability allowed for the user to receive two victory points. Now, the card's primary ability allows a player to receive one victory point if they control Mecatol Rex or receive an additional Secret Objective. This Imperial strategy card is more flexible but still provides a pacing element, and can be used as a powerful tool if selected at the right time.

Twilight Imperium generates unique space operas every time players sit down to play. Fourth Edition not only streamlines many of the rules found in earlier editions of the game, but also places further emphasis on player interaction.

With over 354 plastic units, 450 cards, 700 tokens, 50 galaxy tiles, and so much more, Twilight Imperium Fourth Edition redefines what it means to be epic in the world of board gaming.

The day will soon come when a new Empire will rise. For the sake of all, may the new Emperor have not only the power to seize the throne, but the strength to hold together the peace. Are you ready for another age of twilight?

*This product is not eligible for free shipping*