In 1888, construction of the New Scotland Yard in London's Whitehall District comes to a screeching halt when a woman's torso is left on the police's doorstep. Though somewhat out of character with the most recent wave of brutal murders, the grisly nature of the crime can only mean one thing: Jack the Ripper has returned.

This time, the killer emerges with a new game of cat-and-mouse as he plans to leave four more limbs in unknown locations throughout the city. The New Scotland Yard must reach beyond their precinct to assemble a new team of experts to hunt down the monster and bring him to justice. This may be the investigators' last chance to capture the murderer before he slips away forever.

Fantasy Flight Games is pleased to announce the upcoming release of Whitehall Mystery, the newest addition to the Letters from Whitechapel series. The hunt for history's most notorious serial killer continues in this streamlined standalone adventure that explores one of London's most intriguing unsolved cases.

Whitehall Mystery gives players the opportunity to both pursue Saucy Jack and step into his shoes. Two to four players take on the roles of Jack himself or the real-life Investigators who famously took on the case at the height of the Ripper's reign of terror. The game expands the Letters from Whitechapel universe by introducing three new Investigators, including journalist Jasper T.C. Waring and his loyal dog Smoker, surgeon Thomas Bond, and Sergeant Arthur Ferris.

This new standalone game draws directly from history for its gruesome details and dramatic pacing. Whitehall Mystery emulates the unpredictable nature of the historical crime and limited ability of London's police force at the time by allowing the Ripper's movements to remain unknown to the other players while he commits his crimes about the city. Without the trappings of modern criminal investigations, Investigators of Jack the Ripper's London will have to rely on their wits and powers of deduction to track the notorious criminal across Whitehall.

Whether players choose to chase the villain or evade the law, the hunt is on in Whitehall Mystery.

The Hunt Is On

Whitehall Mystery is a fast-paced strategic game played over four rounds filled with narrow escapes and close calls as Jack searches for new places to deposit his victims' limbs and the Investigators seek to stop him. 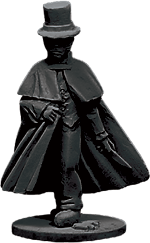 Before the game commences, the Jack the Ripper player secretly chooses and records four Discovery Locations where he will leave body parts for the police to find; one as his starting point, then three he must reach during the game's three rounds. Once Jack has planned his ghastly crime, the hunt begins.

Each round takes place over a series of turns, with Jack first making a move and then the Investigators responding. The round ends when Jack has either made fifteen moves or has reached a new Discovery Location.

The first step of each round starts with Jack the Ripper as he prowls Whitehall's streets toward the ideal place to leave his victim's next limb, then disappearing before he can be captured. Jack escapes by following the streets of London from one Discovery Location to the next, all while avoiding the police on his trail. To accomplish this task, Jack may use Special Movement tiles representing alleys, coaches, and newly added boats to navigate between Investigators with his ghastly cargo. If he can reach all four Discovery Locations over the course of three rounds without being captured, he ensures his place in history as London's most infamous criminal and wins the game. 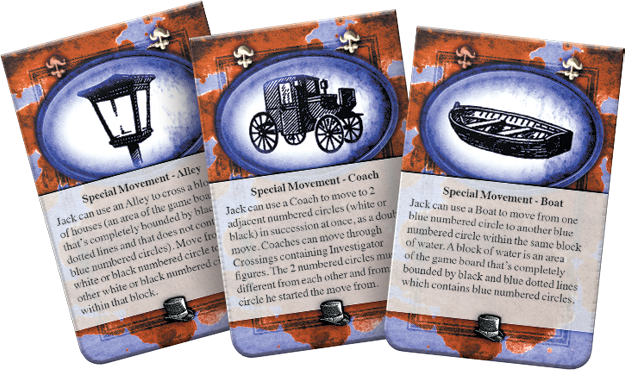 After Jack moves about Whitehall, the Investigators begin their hunt by first consulting, then dispersing throughout the city to cover as much ground as possible. Investigators will want to discuss options with each other before heading out into the city as, the more information they share, the better equipped they will be to ensnare Jack before he disappears into London's labyrinthine alleyways.

Once divided, the Investigators may either look for clues or make an arrest. The pressure is on for players to gather as much information as possible in an attempt to deduce Jack's location and his next target. If they fail to capture the Ripper by the end of the round, the killer might announce that he has reached a new Discovery Location and leave his pursuers another frightful souvenir.

New Tricks Up Their Sleeves

Whitehall Mystery continues the tradition of Letters from Whitechapel and its newest expansion, Dear Boss , by offering players the ability to adjust elements of gameplay to accommodate every level of experience. In a new modernization of the game, Whitehall Mystery introduces a unique element of gameplay with an optional app that randomizes Jack the Ripper's Discovery Locations at four levels of difficulty: normal, easy, medium, and difficult.

Players may also enforce optional rules to help the outnumbered Jack. Newspaper Fabrications increase Jack's stealth by allowing him to reuse either an alley or a boat tile at the start of one of the game's four rounds. Murderer at Large allows Jack to use Special Movement tiles without revealing them to fellow players, leaving Investigators to wonder whether the killer is on the other side of the city, or simply one short block over. 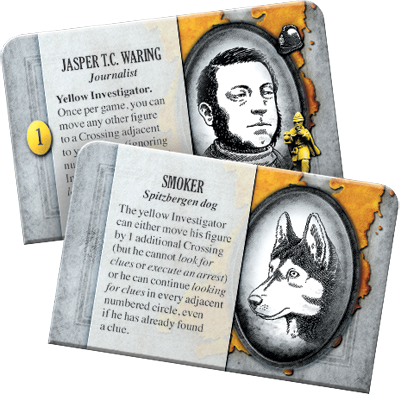 On the side of the law, Investigators can choose to Roll Up Their Sleeves when readying to better track down the malicious murderer. This option gives players a one-time opportunity to use the ability described on each of their tiles. The inclusion of special abilities carries over even to the furriest addition to the Whitehall investigative team‚¬€Smoker's Nose gives his owner, Jasper T.C. Waring, an additional ability that can also be used once per game.

While Whitehall Mystery is a standalone adventure, players can incorporate elements from other iterations of the game to aid their characters. Jack the Ripper can look back on past experiences by utilizing False Clues from the original Letters from Whitechapelgame, while Investigators can Hire Reinforcements from the Dear Boss expansion to aid in the villain's capture.

With nearly endless customizable opportunities, Whitehall Mystery offers an engaging gaming experience for both new players and longtime followers of the Letters from Whitechapel series.

Now that the Ripper has emerged, the race is on to capture him before he disappears again, possibly forever. Investigators cannot let this opportunity slip through their grasp.

Leave your mark on history. Make London quake at the mention of your name or capture Jack and end his reign of terror, once and for all.