A Game of Thrones LCG: 2nd Edition - Dragons of the East Expansion

From the ashes of Robert’s Rebellion, House Targaryen has risen to strength once more. An army of mercenaries, Unsullied, and Dothraki has assembled in Essos, prepared to sail for Westeros and reclaim the Iron Throne for Daenerys Targaryen. All will kneel before the Mother of Dragons!

Fantasy Flight Games is proud to announce Dragons of the East, the eighth deluxe expansion for A Game of Thrones: The Card Game! 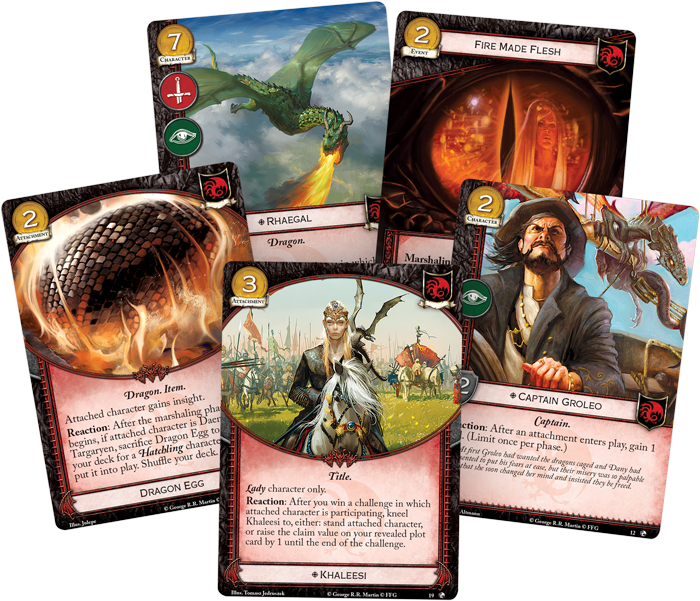 In this box, House Targaryen rises to the fore with new versions of their most iconic characters, including Daenerys Targaryen, Khal Drogo, and three terrifying, fully grown dragons. Of course, every other faction also receives two new non-loyal cards to swell their forces and help them explore new strategies against the Targaryens. With a wealth of neutral cards and plots rounding out the expansion, every faction has good reason to explore what awaits in Dragons of the East. 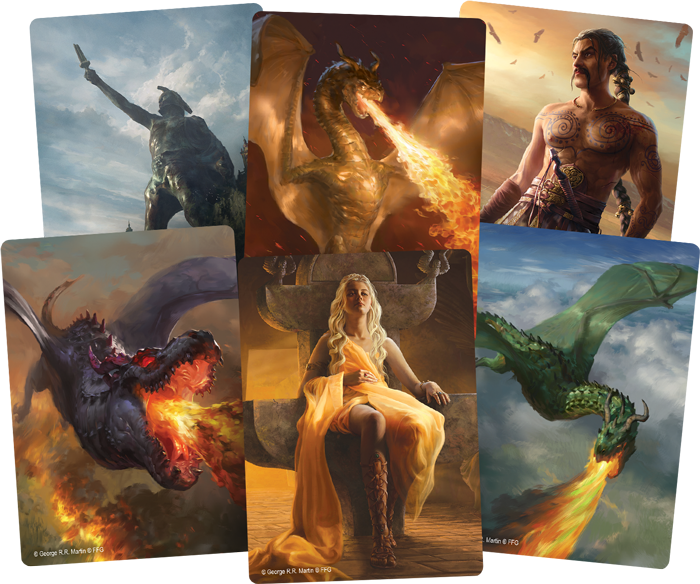 Fire and blood. The words of House Targaryen are commonly associated with utter destruction—the vicious sack of a city or a violent struggle for supremacy. But these primal forces can also be symbols of creation, of new life. The Targaryens have long had a reputation in A Game of Thrones: The Card Game for destruction, incinerating their enemies with deadly burn effects. In Dragons of the East, however, House Targaryen gains a new character who could prove to be the centerpiece of a new, more constructive type of Targaryen deck. 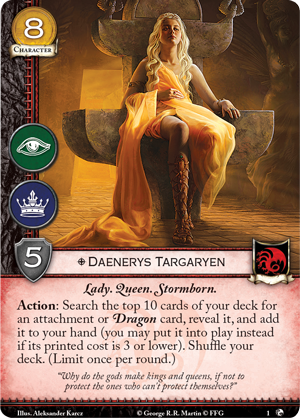 As an eight-gold character, this new version of Daenerys Targaryen (Dragons of the East, 1) establishes her place as a character to build your deck around. Here, Daenerys’s power is derived from a single Action: “Search the top 10 cards of your deck for an attachment or Dragon card, reveal it, and add it to your hand (you may put it into play instead if its printed cost is 3 or lower). Shuffle your deck. (Limit once per round.)”

Although you can only search for a new card with Dany once per round, it can quickly prove to be a useful tool. This version of Daenerys Targaryen bears the Stormborn trait, and with her ability, she can find any of the original Hatchlings from the Core Set and put them immediately into play. Alternatively, she could search for one of the three fully-grown Dragons included in Dragons of the East, each of which offers an additional, more powerful ability to your Stormborn characters. No matter which Dragons you summon to your cause, their abilities are certain to make Daenerys Targaryen more dangerous and more powerful—a one-character army to wreak havoc on your opponent.

Dragons alone may not be enough to bring you victory—so you can use Daenerys’s ability to search for attachments as well. Throughout the game’s many expansions, House Targaryen has already collected a number of attachments that correspond to Dany’s titles, and with the ability to search for them on command and put them directly into play, their time in the sun may be coming. Alongside existing cards like Mhysa (The Faith Militant, 94) or Mother of Dragons (Ghosts of Harrenhal, 94), you’ll find powerful new attachments for Daenerys included in Dragons of the East.

For instance, you may anoint Daenerys Targaryen as Khaleesi (Dragons of the East, 19), letting you either stand your character or raise your claim for this challenge. Or, you could grab a Dragon Egg (Dragons of the East, 20), giving Daenerys insight. And while you’d normally have to wait an entire round for your Dragon Egg to hatch into a Hatchling character from your deck, using Daenerys Targaryen in the plot phase or draw phase lets you reduce that time significantly. 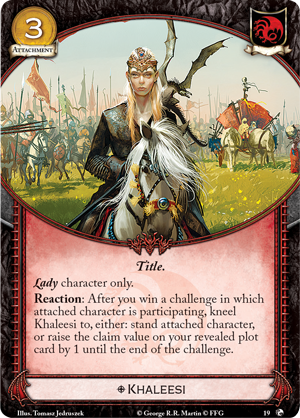 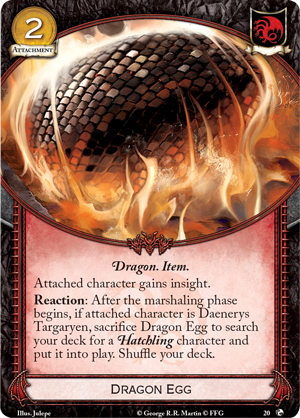 While House Targaryen basks in the spotlight of Dragons of the East, every other faction receives two new non-loyal cards—and many of those cards are leveled directly at countering some of the most prominent Targaryen strategies.

You may peer into the flames of the future with the Dragonstone Convert (Dragons of the East, 26) of House Baratheon. This R’hllor character lets you name any event during the challenges phase. Until the end of the phase, no events with that title can be played! Obviously, if A Dragon Is No Slave (Guarding the Realm, 34) or Dracarys! (Core Set, 176) would undo your plans, the Dragonstone Convert can be an invaluable asset to keeping your characters alive. 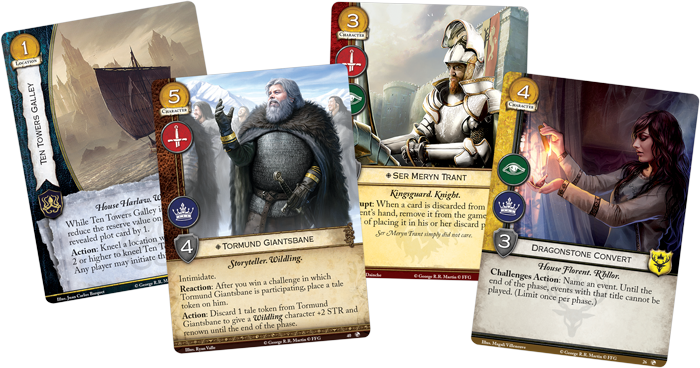 Alternatively, you may rely on Ser Meryn Trant (Dragons of the East, 29) to ensure that your opponent can’t recycle their tricks. If this character is on the board, when your opponent discards cards from their hand, you can remove them from the game instead of placing the cards in your opponent’s discard pile. House Lannister also gains the ability to cancel an opponent’s character, location, or attachment ability on command with The Red Keep (Dragons of the East, 30). Mirroring the effect of Treachery (Core Set, 102), The Red Keep also boosts your income, giving you the gold to field additional forces against the oncoming Targaryen armies.

House Targaryen prepares to cross the Narrow Sea and rain fire and blood on Westeros—but with the Dragons of the East deluxe expansion, you’ll find they have much more to offer than simply the destructive power of burning dragonfire.