Coruscant, capital of the galaxy. This globe-spanning metropolis is the home of Emperor Palpatine and countless other beings. It is also the home of countless mysteries, including the location of an ancient artifact of incredible importance‚¬¦

Fantasy Flight Games is proud to announce the upcoming release of Heart of the Empire, a new expansion for Imperial Assault!

Adventure among the awesome Coruscant cityscape, and face its myriad dangers. Only the bravest rebels dare to operate here, but when it becomes vital to locate an ancient artifact before the Emperor can claim it as his own, you'll set forth on a new, highly replayable campaign of sixteen missions that explore every level of the world, from its glistening halls of power to its grimy underworld alleys.

You'll find three new heroes ready to join the Rebellion, aided by the talented Force user Ahsoka Tano. You'll maneuver through the crowded city, pursued and confronted by Imperials at every turn. And you'll find the Emperor isn't the only major player working against you. The former Sith, Maul, has sent a Clawdite Shapeshifter to pursue the artifact, and any face in the crowd might hide the Shapeshifter's true identity. 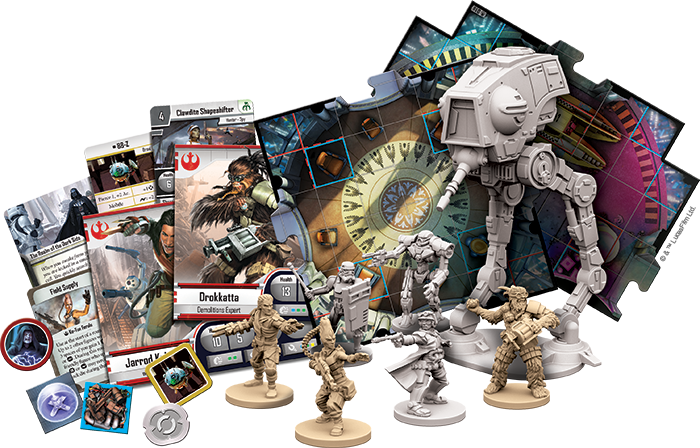 Altogether, Heart of the Empire expands your campaign and skirmish games with three heroes and thirteen other figures, including the massive AT-DP, baton-wielding Riot Troopers, and twin-gunned Sentry Droids. Coruscant comes to life with dozens of new map tiles and more than 130 cards. New energy shield and rubble tokens will throw a wrench in your opponent's plans by modifying the battlefield, and new power tokens give you more control over your fate than ever before!

Alone among the innumerable residents of the galaxy's central city, the heroes of the Heart of the Empire campaign have a tremendous challenge ahead of them. They must continue the reconnaissance begun by another band of Rebels. That team sent word of a powerful artifact sought as a weapon by agents of the Empire, but then its members went missing, presumably because they were captured.

Now the streets of Coruscant lie before them, below them, behind and above them, as do all the mysteries they contain. And the race is on. If the heroes aren't the first to identify the artifact's location, then it might fall into the hands of a mercenary or one those agents who serve the Emperor. Or‚¬€if the rumors are to be believed‚¬€the Emperor himself may be taking part in the search.

Accordingly, if you enter this campaign as one of the Rebel heroes, you're going to need to muster every bit of strength at your disposal. Fortunately for you, Heart of the Empire offers you new options in the form of companions and power tokens. 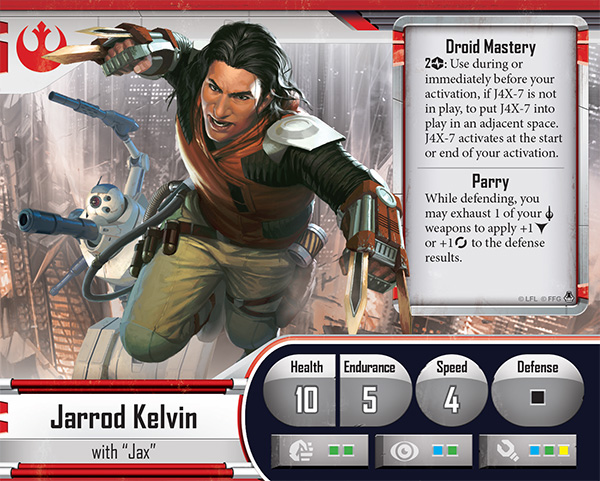 The support figures known as "companions" return to Imperial Assault to bolster both a hero class and an Imperial class. These companions enter play through various game effects and are always associated with a specific hero or group. They count and function as figures, with a few exceptions, and they activate immediately before or after their associated hero or group.

Power tokens, such as those generated and handed out by Rebel Quartermaster Ko-Tun Feralo, , represent a variety of things that increase a unit's effectiveness in battle, from enhanced armaments to affinity with the Force. Once armed with one of these tokens, a figure that declares an attack or is declared as the target of an attack may discard one of its power tokens to apply that token's symbol to the attack's results.

token to boost your attack by a point of damage, or spend your

to reduce the chances that your opponent surges for an attack that stuns you or cleaves into your friend.

With Heart of the Empire, Ko-Tun Feralo brings these power tokens to your skirmish games as well. Her passive Arms Distribution ability triggers at the beginning of each round, making her an excellent leader and invaluable ally, especially since friendly figures who spend their power tokens during their attacks may make them Deadly Precise. 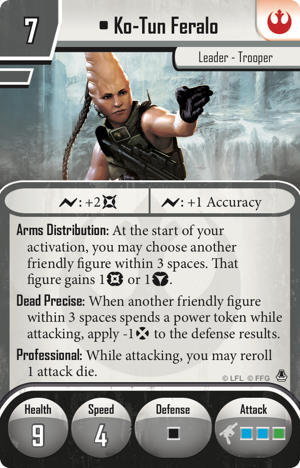 Still, Heart of the Empire adds a lot more to your skirmish games than just its new heroes, their power tokens, and their companions. You'll be able to bolster your armies with the expansion's new units, and you'll gain full use of the new tactics they introduce through ten new command cards. Additionally, you'll find a trio of new skirmish upgrades designed to add flexibility to some of the game's most iconic figures.

Ever wonder what Darth Vader might look like in your skirmish games as he presses his inexorable attack, cutting through foes with his red-bladed lightsaber, Force choking others, and fully Driven by Hatred and anger? With Heart of the Empire, you'll have that chance!

And as if whole cluster of new figures, command cards, and skirmish upgrades weren't yet enough to get you excited about Heart of the Empire, there's still more. The expansion come with rules and a map for four-player skirmishes‚¬€both as Team Battles and as wild Free-for-Alls. Take the cooperative aspect you love from your campaign and import it to the skirmish game, or just prove that your army's tough enough to take on all comers!

Either way, you'll find plenty of opportunities to make use of all the new units and power tokens that Heart of the Empire allows you to distribute between your factions and enhance them all. 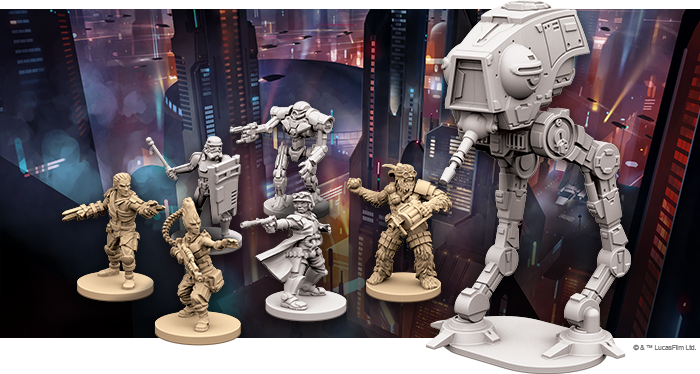 From Glistening Halls to the Grimy Streets

"You want this, don't you?"
‚¬€œEmperor Palpatine

Enjoy a full-length campaign with adventures full of mystery and awe. Power up your skirmishes with new units, command cards, and power tokens. Command or confront the Emperor himself.